I’m currently trying to distill through what is essential, and focusing on that. Stripping away the excess has left more energy for the important pursuits.

Frantic
Feels have been evolving recently, but at the moment I feel frantic. There’s now only 2 weeks left.

Looking back, it seems like I got more done in the first half…
So far I’ve done a bunch into Haskell but haven’t made progress on any projects.

I’m disappointed that I haven’t built some “Pièce De Résistance”. I’ll have completed all the Haskell resources, but typing out function definitions isn’t that gratifying.

This desire has kept me constantly working.

Maybe if I went back 3 months, the improvement would be more obvious. I feel drastically better than a year ago, but it’s hard to know how much of that has come from RC.

Anyway… I’m frantic to feel accomplished, and it hasn’t hit me yet. 😓

Cookies and Blanket Forts
On Saturday, some housemates and I baked cookies! Turns out the house had all the extra ingredients I bought… oops!

In addition to cookies, we also constructed a blanket fort. The cookies were then consumed in the blanket fort while watching a movie. It was glorious: 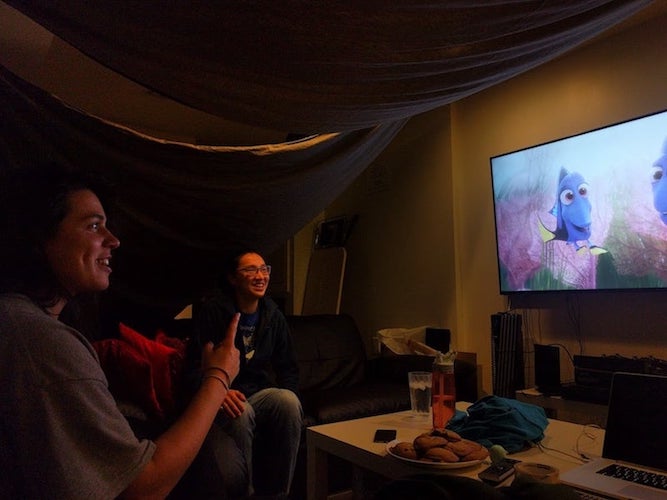 Weapons of Math Destruction
On Thursday I went to a meetup hosted at Postlight.

I was partly motivated to go by the talk, and partly motivated to learn more about Postlight. I got a chance to talk to some employees about their projects, a few of which had overlaps with what I’m working on. The rumors of it being an interesting company were true.

The main event was a talk by Cathy O’Neil on problems arising from the use of Big Data. It was really scary to hear how algorithms can obfuscate problematic systems. Looking forward to reading her book - “Weapons of Math Destruction”.

Changing Project Plans
When I first started reading up on Haskell, I was really interested in using it to build a javascript code generator. Pattern matching and types made it seem like a good fit for the task.

After finishing my Haskell course, I felt differently. I was still interested in that project, but my understanding of Haskell still felt too fresh to be really productive on a project. I also was worried the project would involve more Javascript grammar definitions than actual coding.

Instead, I want to continue improving my Haskell knowledge. So rather than start a project, I’ve begun working on a second Haskell course. (For those interested, it’s the NICTA course)

One of the main features of the course is a test suite, which I LOVE. Why can’t every course just be a bunch of unit tests to fix 😍.

Doing another course doesn’t feed my need to accomplish a big project while I’m here - but I can build a project in Haskell after RC.

Interview Preps
This past week I did 2 interview prep sessions. These have been super helpful.

I’ve done interview prep with friends in the past, but nothing to the level of detail done at RC. Since first starting interview prep at RC, I’ve become much more systematic in my whiteboard interviews.

Some things I’m trying to do:

This is way better than my previous strategy:

Advent of Code
I’ve passively been working through Advent of Code. It’s an Advent Calendar that hands out difficult coding problems instead of delicious chocolate.

It’s fun, and many people are doing it which has lead to good discussions. On the other hand, I’ve been feeling less enthused about random coding problems. I’m more interested in working on projects.

Ironically, I think reading about time management is non-essential - but I’m going to put that aside and pretend it’s the book teaching me that 🤓.

In the past week I’ve been thinking a lot about what is essential. Sometimes I think of things to strip away, without any immediate idea of what to replace them with. My plan is to fill a lot more of my time journalling and meditating.

Park walk
On Sunday I went for a walk through Prospect Park with some housemates. It was nice to be away from computers and technology and just stroll about. Fresh air always makes me feel better.

Blob
Days on end of sitting at a computer is really starting to make me feel out of shape. REALLY looking forward to settling in somewhere and being able to do a better job of focusing on my health.

While I may not be feeling like a massively better programmer at the moment, I sure feel like a much better person.

I was thinking about how much time I’ve invested in blogging and reflecting. It can be exhausting having to reflect on every week. At the same time, I’m excited to have this log to look back on. It’s super interesting seeing all the ups and downs I’ve felt throughout the batch.

Thanks for reading ❤️.

Thanks to @vaibhavsagar and @stanzheng for providing this weeks round of blog feedback.