(It’s currently December 21st! I’ll be trying to backfill using my daily log. Where has the time gone?!)

Batch Gift Angst
There were a few things this week that stressed me out. The first was the batch gift.

It’s a tradition that every batch gets a gift for RC. I was aware of this, but didn’t feel like gift planning was something I wanted to get super involved in.

Luckily, a fellow batch-mate picked up the job of rallying people to brainstorm gifts.

A bunch of ideas were thrown around (I suggested Emoji pillows 😂), but there was nothing that everyone agreed on.

Attempts were made at arranging a meeting, but they were too last minute and people weren’t RSVPing. Gah!

I figured that it was hard to vote in a chat thread. I decided to gather all the ideas and take a poll. I started reading the ideas to do so, but it quickly became too stressful. All the serious ideas were mixed in with ridiculous (or so I assumed…) ideas.

I pictured trying to sort through and having to decide what was “serious” vs. “joke”. I got frustrated by the extra work that would be involved because people weren’t taking it seriously. So I just gave up. That was bleh 🙁.

Eventually people gathered and we figured it out.

Disclaimer: I proposed some jokes too… oops!

Dinner Party Angst
The second thing was a dinner party.

It had been planned a week back and a few people had RSVPed. The day of, I was doubtful that anyone was going to show up. Nobody had really said what they were bringing and only a few people still seemed engaged.

I kinda wanted to flake. Say screw it. I didn’t want to do all the prep work if it was potentially just going to be me and a couple others.

Luckily @hsubox joined forces with me and we decided to commit. Jennifer went and grabbed a bunch of supplies so we could cook/bake (thank you!). We ended up having a good time baking up a storm. I posted baking pictures on Zulip to reassure any other potential doubters that things were on.

We ended up going and being greeted by a swarm of people. The dinner party was awesome. Worries were unfounded. Yay! 🎉

Passiveness
With only 2 weeks left, I was feeling very passive towards work. I felt drawn towards socializing and checking off some end of batch plans… so I did that.

Did a bunch of social stuff this week. Time with RC people is running out - so why nawt!

The RC dinner party was a lot of fun… I’m a sucker for dinner parties (something about a group made meal shared amongst friends makes me 😍). 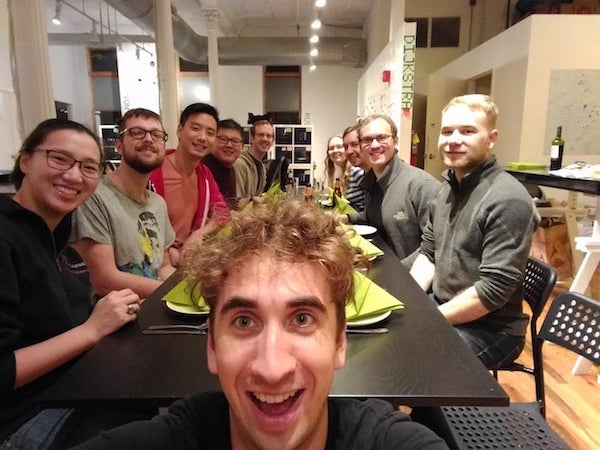 Dinner partying it up @ The Recurse Center 🍽

Circling
Circling was another really unique experience. You can think of it like group meditation.

Everyone sits in a circle and shares their experience of the moment. As people share, thoughts and feelings start to bubble up which then feed into the discussion.

The experience didn’t strike me as particularly enlightening at the time. It wasn’t until the following days I noticed how much it affected me. Suddenly I felt much more aware in my interactions. I also became likelier to vocalize my feelings while interacting with others.

Sooo now I’m hooked and will be seeking more when I return home 😊.

R0ml
This week was the last week of R0ml’s residences. His speeches are very much geared towards stirring the pot and getting people to question their assumptions.

During Monday’s talk he discussed anti-patterns. In particular, the following were some of the things described as anti-patterns:

It was interesting watching everyones reactions to the talk. Some people were really frazzled. R0ml has a conviction while speaking which is hard to argue…regardless of whether you agree.

Also had a good chat with R0ml about the future of programming education.

His main idea was that we are wasting our time teaching people to code. There’s already tons of code in the world and there’s people always writing more.

What the world does need is people to combine existing software in new and interesting ways. People who can submit bug reports and small code fixes.

Sure, some coding is necessary for that - but in general its a different skill set then teaching programming from the bottom up.

Over the course of my batch, my testing pride brought people to me asking testing related questions. Many people were very confused about how to test, what to test, when to test, etc..

I don’t blame them.

Writing a test suite can feel like a completely separate project. Technically it’s not even necessary. Sure a good test suite can make your life 100x easier, but it requires an upfront investment of time.

I don’t think this is a problem with the materials. There’s lots of GREAT content for learning about testing and TDD. If anyone wanted they could do a google search and find relevant tutorials.

What there isn’t a lot of is people who are excited about testing and willing to push others to start. I only got into TDD because I pair programmed with some awesome people who showed me the way. Before then, I was happily writing out code without a worry for whether it was tested.

With time at RC running out, I decided to run a collaborative work session called “Testing Time 🕑”.

There was a reasonable amount of interest. Some people came and only stayed for the talk. Others stuck around and did the collaborative portion. I had a lot of fun helping people setup linters and get their test suites up and running.

I like to think it helped people chip away at their testing fears.

Haskelling
I worked through more of the NICTA course. I managed to finished Functors and Applicatives… less than I would have liked…

Resume review & job applications
One of the under appreciated aspects of RC is the career guidance.

This week I had Nancy review my resume. It was encouraging to get feedback from someone who has seen a lot of tech resumes.

She gave some good feedback and I spent part of the week trying to clean it up. Felt very torn between:

RC is for becoming a better programmer. I can do this when I get home.

I should really get on this so I’m not running around last minute looking for jobs.

Sick
Been noticing that even small amounts of alcohol at RC social events have left me feeling sick.

It’s extra crappy when it happens on days where I slept in…
and an RC social event is in the afternoon…
and I get no work in before having a beer and getting a horrible migraine 🤒.

Living off limited groceries
With the batch coming to an end, I’m trying to be aware of all the food I need to finish.

I always find myself hesitant to grocery shop when I’m staying somewhere short term. It surfaces worries that I won’t be able to finish whatever I buy.

In practice groceries are WAY cheaper and not that hard to finish. But even leaving a few $2 bags of pasta unfinished gives me angst!

So gotta chow down before leaving.

Did it! Another week done.

These have been exceedingly harder to write as time has moved on.

In any case, I think it’s been a good experience. One of my more uncomfortable pursuits.