Published before the end of the year! What an achievement!

My time at the Recurse Center is complete. I am both incredibly grateful for my time there and excited to be moving on.

Moving Stress
No matter where I go or what I do, transitions are stressful. A sort of impending doom that can’t wait to get over with.

The last week also started loading on the thoughts of
“Have I done enough?”,
“Have I seen enough in New York?”,
“Will I have a chance to say bye to everyone?”.

Gah! Get me to Toronto already!

Defeat
Perhaps as a result of the stress, I allowed myself to feel defeated.

Game over. No coding is getting done this week. Focus on moving, exploring and socializing.

Coding needs a certain amount of mental focus that I just didn’t have. Others seemed to feel similar.

Trip to New Jersey
In 2013, I did a trip to Asia and met a bunch of cool people.

In 2014, one of those cool people (who I met in Japan 🇯🇵 !) was going to be in Niagara Falls. Naturally I bussed down from Toronto to meet up with her.

It’s 2016 and that cool person now lives in New Jersey. I had meant to make a visit, and the last week motivation finally made it happen.

Got to take a little walk around the other side of the water and catch up with my friend.

With all the moving around, I run into a bunch of people and always leave wondering when/if I’ll ever see them again. Encounters like this one (still being in touch with someone I met in Japan 3 years ago) give me hope.

(If you’re reading this and want to meet up, let’s make it happen!)

Circling
@sofiajeanne ran another round of Circling sessions this week. So many people were interested that the groups needed to be split into 2.

I showed up in the morning to find only 3 other people had arrived on-time. We got to have a really nice session with just the 4 of us.

This week I worked on being less protective of others. Being able to speak to my experience and not worry about how it affects others. Letting others have their feelings without the need to comfort them or push them towards other feelings.

Really loved it - so thanks for sharing it with us Sofia-Jeanne!

RC Goodbye/Christmas Party
As with every goodbye, RC threw a party!

One of the things mentioned in the party description was that it would have no dress-code. The example of pajamas was given as an acceptable outfit. 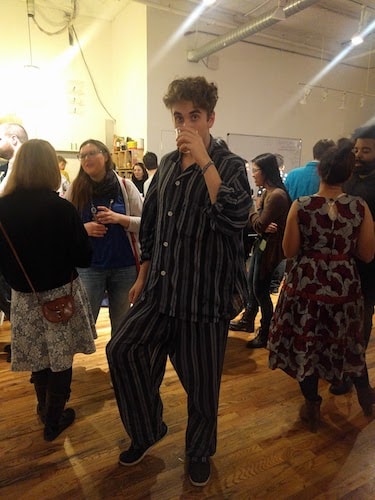 It was nice to have one last night of silliness with all the pals. 😊

A bunch of alumnus were also in attendance, which was super lovely! Was a good chance to say all the goodbyes.

Ended the night at 3am, sitting in a circle, being nostalgic.

Make RC Better Meeting
One of my favorite things at my last company were the weekly “Retrospectives”. They were a time for the team to discuss the past week and how things went.

BUT RC ORGANIZED ONE THIS TIME AND I REALLY ENJOYED IT.

One of my realizations from the meeting was that many people wanted there to be more group projects. When I came to RC, I felt very primed for taking ownership of my own learning and doing my own projects. The application process even asks what you will work on. In a way, knowing what you want to work on is a criteria for getting in.

So with that, I had not been thinking about group work.

Some interesting ideas passed around about how to get more long-term collaborations. Hopefully that gets integrated.

I had been really interested in presenting, but when Monday rolled around I felt totally unprepared. I took my name off the list, felt bad for not giving presenting one more go, put it back on, took it off. Bleh.

Shouldn’t have spent so much time hanging out with people!

Job Interviews
This week I had some job calls. In retrospect, I really wish I hadn’t started getting in touch with places. Having to take calls and practice for interviews during the last week was very stressful.

Niceties
As with the past outgoing batch, everyone took some time this week to write nice thoughts for each other. This was WAY more time consuming than before. Mainly because:

Logging “Experiments”, “Activities” and “Events”
When I first got to RC I did not expect how welcoming, open and supportive RC is. The breadth of events/activities/traditions/experiments/whatever you what to call them - it’s ridiculous.

Unfortunately, I couldn’t find a comprehensive log of all the things that had been done at RC.

So now that my last week of RC is complete, I’ve been trying to create that log. Within the RC wiki, I’ve been creating new sections for highlighting all the things that happen at RC.

Really happy with how things have turned out, and hope others get inspiration from seeing the history of events.

No Coding
As hinted to above, got NO coding done this week. That was a bit sad 🙁.

This has been the most useless section. I neglect my health so bad!

…I guess I danced a bunch at the social
…and finished most of my groceries
…so those are things.

So there you have it! A rough, incomplete and angsty summary of my time at RC.

Much love to all the RCers who helped me review it at some point or another. Definitely gone mad overthinking what I should write some weeks.

I’ll go through all the posts and create some sort of Return Statement.

RC has definitely been one of the coolest things I’ve ever been a part of. The people, the projects, the space.

So with that, I’ll sign off one last time! 👋

Much love everyone, it’s been a blast 🚀❤️!

Thanks to @vaibhavsagar for providing updates via PRs 😊.