Sorry, I have more school to finish.

Sorry, I want to work in a different city.

Sorry, I want to travel and focus on my own projects.

Sorry, I want to attend the Recurse Center.

On Monday, I accepted a full-time offer with Squarespace 🎉.

Job hunting was far from the seamless process I imagined it would be. Here’s a review of my 2 months interviewing in tech.

The first step of my journey was interview prep.

In December I was finishing a batch at the Recurse Center. During the final weeks I switched gears towards interview prep.

I highly recommend taking a week or two to prep. Most of the time between mid-December to early-January was just switching my brain to interview mode.

During this time, I made the mistake of scheduling a phone interview before I was fully ready. I failed pretty spectacularly and ruined a really great opportunity… not good 😢.

I updated my resume before starting applications and a few times throughout the process. Some things I tried to do:

With each update I shared my resume with a bunch of people for feedback. Here’s a .gif of all the iterations it went through.

It changed quite a bit over the course of the 2 months. Looking back, I feel a tad gross having sent out the original version 😅.

Over the course of my 2 month search, I applied to 43 companies.

Here are the stats*:

* Interested means I was contacted for some type of interview.

Something to note: Referrals were 3x more likely to get a response.

I found referrals via:

I would highly recommend reaching out to your networks. Referrals are so much more reliable.

Side note:
Extra thanks to the Recurse Center. They were incredibly helpful during my job hunt.

Before working with them, I assumed recruiting was just a means to an end.

After working with them, I’m super grateful they recruit. It was another amazing perk of attending.

Of the 43 companies I applied to, 16 went forward with some type of interview.

When I accepted my job offer, I was in the middle of a few other processes. I ended up having to withdraw my applications (not enough time to finish 😥). When I was applying, I tried to avoid this as much as possible by spacing out my interviews.

Here’s how I progressed through my interviews: 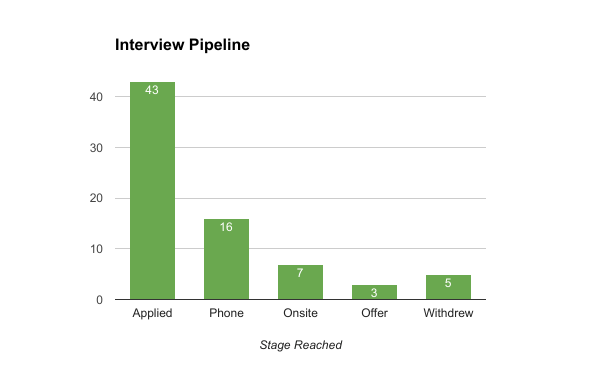 Interviewing was a bunch of ups and downs.

Some days I’d be applying all over and feeling super excited about my chances.
Other days I’d be freaking out because weeks had gone by without any responses.

Some days I’d be scheduling interviews non-stop.
Other days I was looking back on rejections and feeling defeated by all the failures.

It’s also a well known fact that interviewing is not an exact science.

After my first couple of rejections, I started getting really frustrated with technical interviews.

These coding problems are so arbitrary! If I ever needed to know this, I could easily Google it.

I’m not allowed to run the code? How is this testing my actual abilities?

Yikes! I’ve been doing nothing but algorithm prep for a month and this is a CSS question…

I wished people would just ask me about my past projects and how I work with other people.

Then I had some really laid back interviews that did just that - those left me concerned.

That was all conversational… what if they just hire random people who can talk but can’t code?!

He didn’t write any notes. What’s he going off of other than just gut instinct?

This is too easy…

By the end I had a new appreciation for how hard it is to interview.

All the while you have a growing stack of applicants just waiting for an interview. 😩

I wonder if any companies let candidates choose their interview style. Give a few different options and let the candidate pick the path that works best for them. I’d like to see how that type of system would work out.

Luckily, not all my interviews left me banging my head against a wall. Some were really fun!

Besides the interviews themselves, I also had some really good recruiters. People who were super attentive and eager to move things along at whatever pace I felt comfortable.

Interviewing was tedious, so every supportive recruiter and well thought out interview was much appreciated ❤️.

Learning I had offers was really stressful.

Do I take it or finish interviewing with these other companies?

Is this my market value? Should I negotiate?

Company A is really cool, but I’ll have to move so far. Company B is smaller, but in a better city. How do I choose??

I don’t plan on moving again for a while, so it was a big decision. The factors that led me to choose Squarespace:

Places in Vancouver were a close second. I met a bunch of wonderful people there during my time at Mobify. Still sad that I won’t be as close to them as I would like 😢.

Some notes for past me

Now that it’s all over, what tips would I have for past me?

I couldn’t end without sending out some appreciation…

It’s been a hectic 2 months, and I’m so excited that it’s over.